I'd like to begin this post with a confession ... I have only recently discovered Supernatural Tales. Some time back, I stumbled across David Longhorn's excellent collection of short stories, The Ptolemaic System. Having read that in one sitting, I could not find anything else by this author; but, once I found out he edited a thrice-yearly collection of ghostly tales, I had to have a look. Needless to say, it is just my thing; full of great writers, both well-known and less-well-known, and exuding a traditional quality borne of sensitive editing.

So, once I had read Supernatural Tales issue #23, I thought I would make my opinions known in the form of a review. 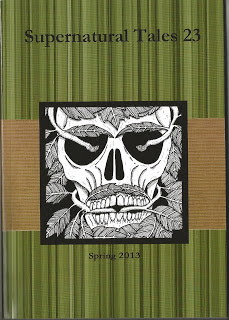 My first thought was that it sported great cover art. And, not long after, that Iain Rowan's The Singing caught me and wouldn't let me go from the first line. Very much along the lines of the traditional folk tale – the remote community beset by strange happenings, seemingly misunderstood by its god-fearing inhabitants – Rowan adds powerful doses of jealousy and revenge. The villagers are at the mercy of the sea and the weather, certainly: but is that all? Timeless.
By contrast, Ilona by Tina Rath brings the reader back to the modern world with a bump. We are invited to share the thankless experiences of an illegal immigrant trying to make ends meet cleaning the floors in a hospital. I'll admit it had me going, assuming a simple tale of Ilona's victimisation, but the conclusion wasn't quite what I had been expecting.
A Moment of Your Time by Katherine Haynes, is a more ambitious affair, linking several situations and protagonists with the unexpected results of participating in a shopping-centre survey (one of my most dreaded scenarios, it must be said, even without the unfortunate consequences. Avoid eye contact at any cost!) A great idea for a short story. As the reader is in no doubt about the connection, the atmosphere and detail are relied upon to propel the narrative, and they succeed. The urban feel made me think of Archway by Nicholas Royle.
Gemma Farrow takes us back to the elemental with her contribution, Screech. Caleb can't understand his partner's sense of impending doom during her pregnancy: “'I dream of babies being taken,' she whispered, leaning back against the headboard." Their differing takes on the situation, and Caleb's slow realisation that her concerns may be genuine, unsettle the reader. The morphing of the doctor into The Fallow, and the shocking denouement, force both Caleb and the reader to confront their worst fears.
Last Testament by Craig D.B. Patton is an enigmatic tale concerning both ghosts and misunderstanding. The secrets of the protagonist's brother-in-law, a recently-deceased artist, are gradually revealed through other-worldly connections with his computer. Long-standing deceptions and conflict, both in art and in life, have to be confronted ... head on.
James Everington has clearly been influenced by the classic tale The Monkey's Paw, and it could be said that The Second Wish is something of a tribute. Fraiser has returned to his family home to arrange its sale, in the process finding out he may have been affected more profoundly by his formative years than he was aware. He 'snuggles' in his childhood bed (or has he returned to the womb?) and leafs through Macabre Tales for Children, opening it at that very tale by W.W. Jacobs. He recalls how reading it had spooked him as a child, and his imagination takes him on a journey forcing him to confront his past. This is a typically tense and involving example of Everington's writing. I enjoyed the confusion between the Doctor and the Lawyer, blurring reality and making the reader think twice about how reliable Fraiser's mindset is. Also, the seagulls on the roof reminded me of A Roman Question by Robert Aickman ... which can only be a good thing!

The Tempest Glass by Daniel Mills is the final story in Supernatural Tales #23; therefore it ends very strongly. We follow the tribulations of the Reverend Danforth: a singular character, who never quite finds resolution, but who is all the more fascinating for that. His battle with his own faith, challenged by the strange titular object, leads to flight and, ultimately, to tragedy. Was his exile self-imposed?
In summary, this collection asks a of of questions, and gives just the right amount of answers. I like my short fiction dark and unresolved, and am satisfied. These are ghostly tales of the highest order, and are to be savoured. Long live Supernatural Tales.
Posted by MRCosby at 02:31