Obsession
1. An idea or image that repeatedly intrudes upon the mind of a person against his will and is usually distressing.
2. The action of any influence, notion, or 'fixed idea', which persistently assails or vexes, esp. so as to decompose the mind.
3. The hostile action of the devil or an evil spirit besetting any one; actuation by the devil or an evil spirit from without; the fact of being thus beset or actuated. 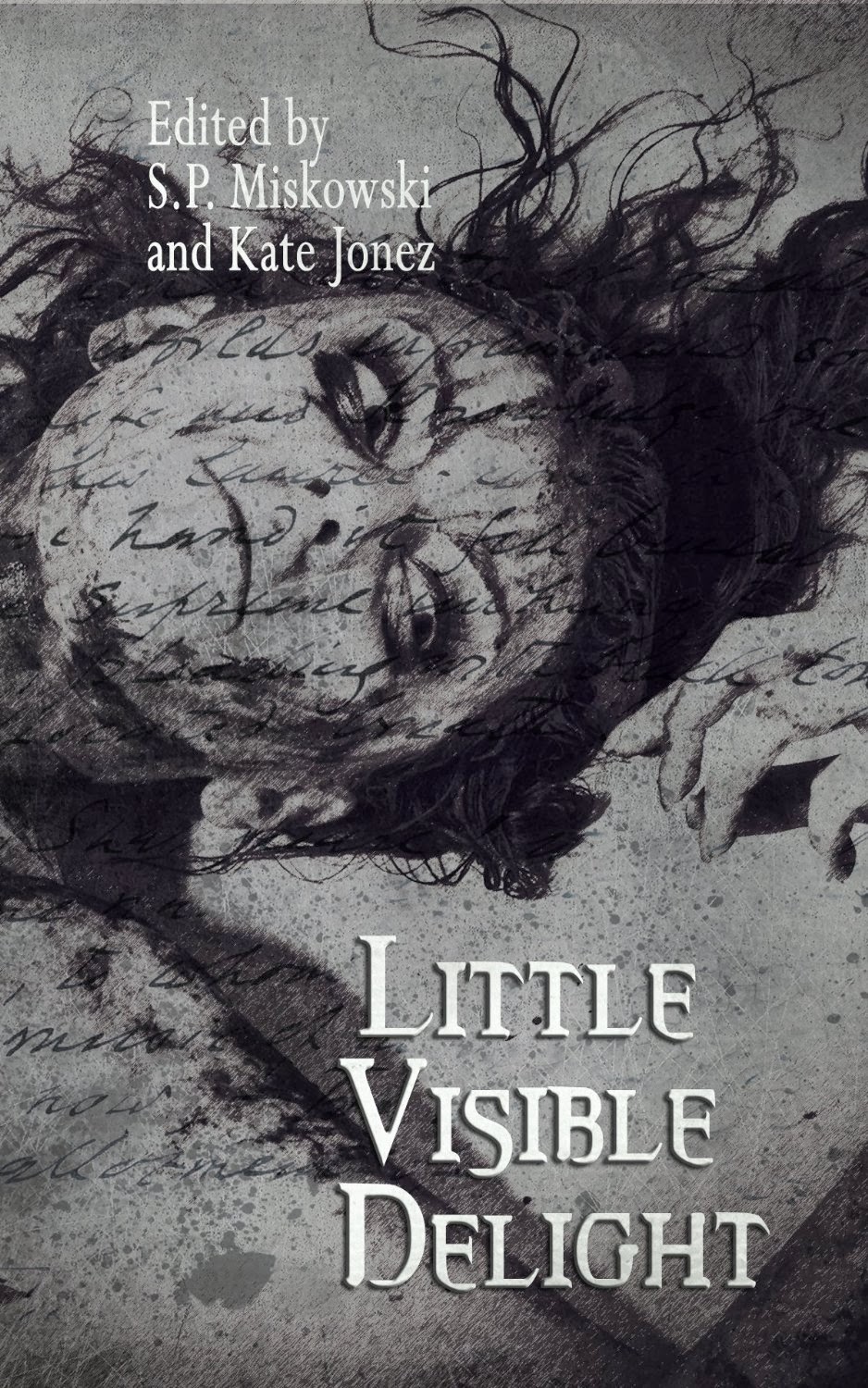 When I found out that Little Visible Delight, the anthology of dark fiction by S.P. Miskowski and Kate Jonez, was themed along the lines of 'obsession', I felt compelled to get out my copy of the Compact Oxford English Dictionary. Each definition seemed scarier than the one before. It was a good omen.

There's nothing quite as inviting as a collection of dark fiction, especially with every story being new to me; and every page of this publication is to be savoured, consisting of edgy, unnerving tales of subtle strangeness. Proceedings kick off with The Receiver of Tales, by Lynda E. Rucker, in which Aisha recalls her intimacy with Ruben, and of how he had been usurped by people's stories; and of how it ruined him. Has this curse been transferred to her? It seems so, as she carves precious words all over her body. Is she stronger than he, or will she take the easy way out? She embarks upon a dreamlike journey, and at its conclusion, Aisha realises she cannot live without the very obsession she railed against.

Preoccupation with the fountain of youth and the ruthless pursuit of immortality is tackled in the complex Needs Must When the Devil Drives, by Cory J. Herndon. It seems we must be careful what we wish for, and be grateful for being a long time dead! Next up Kate Jonez provides A Thousand Stitches. Laura Beatty finds herself at Malley's Dry Cleaners, a down-at-heel establishment which she hopes is a stepping-stone to the exciting life just around the corner in New York. She repairs wedding dresses with Judy, a worker who seemingly has a murky past with the firm. When conditions and pay are changed for the worse, Laura Beatty faces the fact she may never be able to achieve her dream of escape; yet a chance is given and taken both immediately and gratefully. Once she is safely in New York, however, the reader has cause to question both her motives, her methods and even her identity.

Johhny Worthen's intriguing tale The Point, set in the dark bunker of the mind, tackles death and Armageddon, leading on to Calligraphy, by James Everington. Blake rises one morning, not as a beetle, nor even to be arrested, but to find 'elegant, cursive writing' all over his face. He is, however, unable to decipher the meaning of the words. Forced to forsake his preferred seclusion in order to seek some kind of explanation, a neighbour leads him to an unfamiliar church, in what has become an unfamiliar world; in front of the congregation, the priest reads the words on his face. Does this bring enlightenment, or just the opposite? A typically compelling story by this author.

This Many, by S.P. Miskowski, explores the world of the competitive parent. Stay-at-home mother Lorrie dreams of the perfect fairy dress for her daughter Frances, and forces her to don it for her birthday party: '"Mom made it so I have to wear it," Frances said, and rolled her eyes.' During this extravaganza, an extra adult appears and causes much confusion after disappearing somewhere within the house. A search reveals nothing, but the contact between the sinister intruder and Frances has caused something to change, so that next year's party may not be looked forward to quite so enthusiastically... Miskowski deftly exposes the cracks present behind the facade of the perfect family, leaving the reader to wait for the inevitable collapse.

JP, by Brent Michael Kelley, explores a child's seemingly innocent obsession with a pet which has died; and of how a strong desire not to be separated ends in something gruesome. Deceptively simple, this story is not for the fainthearted, and is as close to conventional 'horror' as this collection gets. Black Eyes Broken, by Mercedes Yardley, is the sad tale of Natalia, who has the unfortunate knack of destroying everything she loves. Her relationships inevitably end in tragedy, and this leads to her withdrawal from the world. Worse is to come, however, as she thinks of the future.

This fine anthology is topped off by Bears: a Fairy Tale of 1958, by Steve Duffy. This is a finely-wrought take on Goldilocks and the Three Bears, documenting the Bear family's attempt to assimilate into late-1950s society, but suffering from discrimination, heartache and practical problems at every turn. Tongue-in-cheek it may be but it still packs a satisfying punch.

There is not a weak story here; and, add to this the excellent design and presentation of the Kindle version I bought, means I would recommend this wonderful collection to anyone who enjoys short stories.

I'm very pleased to announce that Dying Embers, my first collection of strange adventures, is now available for pre-order direct from Satalyte Publishing. All you have to do is send an e-mail to sales@satalyte.com.au with your request and there you go! It will give them an idea of the demand in advance of publication... and you'll be first in the queue. 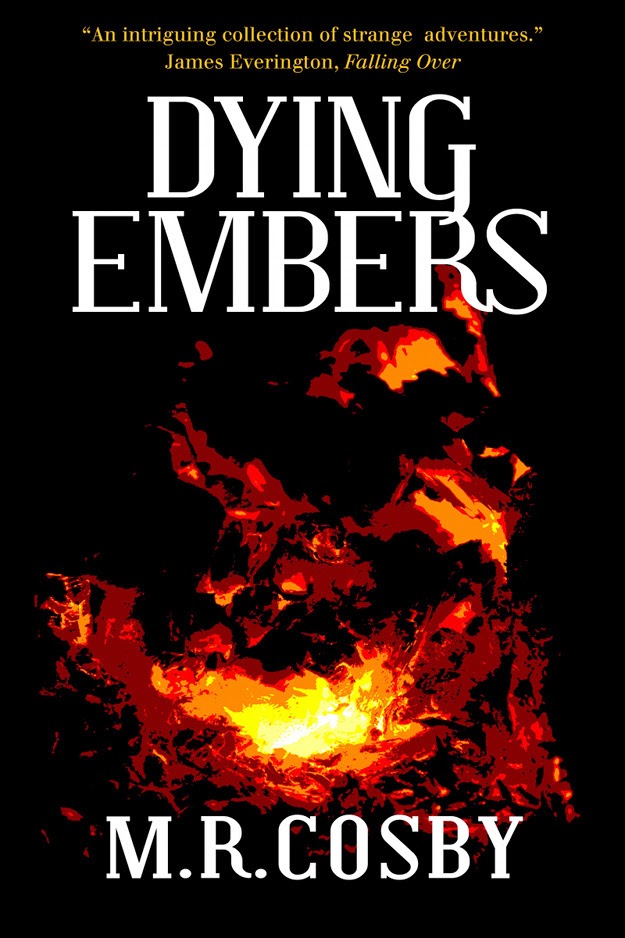 “My mind had created a monster in the next terrace…”


Welcome to the world hidden behind the everyday. These stories of urban strangeness explore what goes on within the dying embers of the fire, once the heat has almost gone.

An historic building holds the key to a terrible secret from Letherby's youth. A passenger on an international flight finds out that he is not master of his own destiny – finding out who is, though, is quite another matter. Rural Australia proves less welcoming than Preston had hoped, forcing him to confront the guilt from his past. Pocock witnesses something calamitous on the river bank which changes the course of his life. The alien landscape of a network of warehouses provides the background to a remarkable transformation. An ill-fated property search leads first to admission, then to a strange form of retribution, and ultimately to a terrifying reunion.

“A fascinating and eclectic collection of strange adventures…”
James Everington, author of Falling Over.

“These are powerful, energetically written tales that are some of the finest I’ve read in the genre of dark fiction. The language is wonderfully imaginative and instantly thrusts the reader into the realms of slowly revealed decay. A must-read!”
Paul Hodge, Freaky Folk Tales


Check out the full list of books coming up from Satalyte here. Many genres are represented, so there is bound to be something for everyone. By the way, the website for Dying Embers is at martincosby.com so have a look if you like. I will let you all know as soon as I have a publication date.

I was born in Kensington. My father was a composer. My mother came from a rich home, and was, I believe, incurably romantic. She married my father, despite the half-hearted protestations of her family, who felt that to marry a musician was very nearly as bad as to marry into trade, and much less secure.

So begins chapter one of The Beautiful Visit, Elizabeth Jane Howard's first novel, and the first example of her writing I had encountered; many years ago. It soon became one of my favourite novels. Enchanting, sensitive and beautifully written, it tells of a magical experience in a young girl's life, the mood of which can never be regained. Despite the delicate, elegant prose, it is also powerful, quite an achievement for a writer so young (she was in her twenties at the time). The book is dedicated 'To Robert Aickman', and it was some time before I noticed this, linking it to the author of Ringing the Changes and The Hospice I had enjoyed many more years previously. Intrigued, I bought a copy of her excellent autobiography Slipstream, and I began to discover what a strange relationship the two had. As my interest in Aickman deepened, it became clear how much she may have affected his writing.

The Beautiful Visit displays a sense of mystery, a lightness of touch – even, yes, of strangeness – which could in fact have influenced Aickman. They first met when she approached him with the complete manuscript of The Beautiful Visit as he was at the time a literary agent, and an experienced writer, though only in journals and of reviews. He advised her and helped her revise her work, and was influential in getting it published. It was an immediate success, winning the John Llewellyn Rhys Memorial Prize and selling well.

It was only after this that Aickman began writing his own fiction. I've heard suggested that he was rather jealous of Howard's admiration of L.T.C. Rolt's supernatural stories, therefore setting out to outdo his fellow Inland Waterways founder by penning his own. (If this is true, in the long term he was certainly successful; however, Sleep No More, Rolt's collection of short stories, is well worth reading in its own right.) His problems began when he struggled to get his own stories published. It was perhaps a blow to his ego when he could only achieve this by a joint venture with Howard, insisted upon by the publisher to ensure sales; which became We Are For the Dark. Certainly Three Miles Up, one of Howard's three stories in the collection, could be said to be Aickmanesque; however, it was written before such a term could be applied. It's certainly one of the most finely-wrought and enigmatic of short stories. Howard of course went on to achieve the kind of critical and commercial success Aickman could only dream of, and indeed he went searching for something similar by dallying with the American market later in life. He barely succeeded (his works were rarely reprinted, and his stature has grown, in the main, since his death). Howard was to spurn him; yet Aickman's fondness for her continued throughout his life. He even asked to see her on his death bed, a request which it is said she declined.

I had a dream some years ago that I bumped into the ageing but still beautiful Elizabeth Jane Howard at a party, and she shared with me and me alone some confidential snippets about her tempestuous relationship with Robert Aickman so many years before. Until a few days ago, I was hopeful this unlikely event may somehow occur.