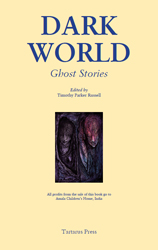 How do I justice to a spanking new book of strange tales such as this? There are few better prospects. Of course no collection can consist entirely of winners, but as I put this book down I felt the balance was very much on the positive side. So, as you asked, here goes with my inevitably biased and flawed view.
The editor begins strongly with his choice of a Reggie Oliver story, Come into My Parlour. Anyone familiar with his stories of theatrical life will recognise the sure-footed writing style and heavy atmosphere, here brought closer to (a rather cold and draughty) home. Aunt Harriet would be enough to strike terror into any young boy's heart; and, as the tale reveals itself with a creeping sense of dread, the reader is tempted to fear the worst. Whether that worst actually comes to pass or not is the crux of the story. Was there in fact a terrible legacy?
There is also some kind of legacy in Cristopher Fowler's singular Mistake at the Monsoon Palace, but the reader is left guessing, in the very best sense. This tale brings India alive in a most vivid fashion, asking more questions than it answers; is Marion in control of her destiny, or does her driver, Shere, have more influence than it would seem? The ending hits just the right note of uncertainty.
The Swinger by Rhys Hughes is the tale of an unsatisfied ghost (can you guess the means of its demise by the title?) and the writer who becomes rather too intrigued by the resulting legend. A convincing dream-like quality is created, perhaps demanding a little touch too much suspension of disbelief; but hey, it's a weird tale, and most enjoyable nonetheless.
A more traditional approach comes from Mark Valentine's An Incomplete Apocalypse. Hugo Winwick follows a carrot dangled before him for publication in a certain august journal, and his investigations lead him to view a manuscript ... with apocalyptic results. Fans of a certain MR James will be satisfied.
An entertaining anthology needs contrast, and that is provided by Corinna Underwood's The Arndale Pass. Much shorter than the other stories included, it weaves a tale of deception and obsession powerfully within a few pages, the reader feeling that not a word is wasted. Its change of pace works well if the collection is read in one sitting, which I could not help but do. (In any case, any strange story apparently named after a shopping centre in my home town must be worth reading, surely.)
I am a fan of Rosalie Parker, and I find her restrained, atmospheric tales of Yorkshire ring true. Oracle is no exception. Imbued with welcome warmth when least expected, and deceptively simple, it opens up upon re-reading.
Which brings me to The House on North Congress Street by Jason A. Wyckoff. This to me is the collection's 'slow burner'. Undoubtedly it takes a while to get going, and this reader was reminded of the wordy style of writers such as Margery Lawrence. Duly, the atmosphere intensifies, and the encounter under the bed was genuinely creepy.
I'm all in favour of strange happenings within a mundane setting, so I enjoyed Ninth Rotation by Stephen Holman. I can relate to Earl's frustration with his pupils and the systems in place at the school. The boy who appears to him is a good metaphor for all that may be wrong in his life, and the reader is carried along through the school day, ending up with what may very well be something like revenge.
The choice of final story is, as it should be, a strong one. Steve Rasnic Tem rarely disappoints and Wheatfield With Crows is a cracker, combining strong characterisation with a great setting; and a suitably strange ending for such a satisfying anthology.
If you are an aficionado of the strange and uncanny short story, you will find the only thing missing from Dark World is ... more of the same.