Acquainted With the Night

A few more of my favourite poems for your enjoyment today. I have been busy editing and re-writing stories for my upcoming collection, (probably) called Dying Embers. It's still some way off, and it means I don't have so much time for the blog right now. 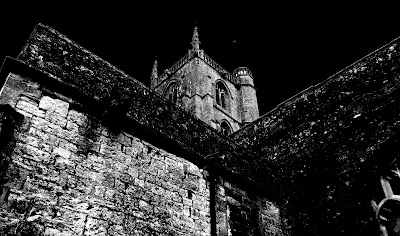 Acquainted With The Night is one of Robert Frost's lesser-known poems, but it has an elegance and simplicity that appeals to me; and a certain mystery. What exactly does 'I have been one acquainted with the night' mean?

Acquainted With The Night
by Robert Frost

I have been one acquainted with the night.
I have walked out in rain—and back in rain.
I have outwalked the furthest city light.

I have looked down the saddest city lane.
I have passed by the watchman on his beat
And dropped my eyes, unwilling to explain.

I have stood still and stopped the sound of feet
When far away an interrupted cry
Came over houses from another street,

But not to call me back or say good-by;
And further still at an unearthly height,
One luminary clock against the sky

Proclaimed the time was neither wrong nor right.
I have been one acquainted with the night.

Resumé is Dorothy Parker's best-known poem, and it is rather brittle, perhaps in a similar style to her short stories. It's light-hearted on the surface, but conceals an undercurrent of darkness.

Razors pain you;
Rivers are damp;
Acids stain you;
And drugs cause cramp.
Guns aren't lawful;
Nooses give;
Gas smells awful;
You might as well live.


Finally, Ozymandias by Shelley, surely one of the most powerful and influential of sonnets. It's interesting how the words of the poet have long outlasted the monument he wrote about (although Shelley apparently never saw the statue of Rameses II – aka Ozymandias) as it does not survive.

I met a traveller from an antique land
Who said: Two vast and trunkless legs of stone
Stand in the desert. Near them, on the sand,
Half sunk, a shattered visage lies, whose frown,
And wrinkled lip, and sneer of cold command,
Tell that its sculptor well those passions read
Which yet survive, stamped on these lifeless things,
The hand that mocked them, and the heart that fed;
And on the pedestal these words appear:
"My name is Ozymandias, king of kings:
Look on my works, ye Mighty, and despair!"
Nothing beside remains. Round the decay
Of that colossal wreck, boundless and bare
The lone and level sands stretch far away.