Recently we visited Meroogal, a house owned by the Historic Houses Trust. It is on the outskirts of the busy town of Nowra, on the southern coast of NSW; a weatherboard house, it's fairly typical of country towns, but is remarkable as it has survived for so long with so few changes. I'm not sure quite what I expected, but my first surprise was at how difficult it was to find. Set back behind trees in a quiet back street atop a gentle hill, there was no sign of it being out of the ordinary; indeed, being somehow ordinary is its main attraction. 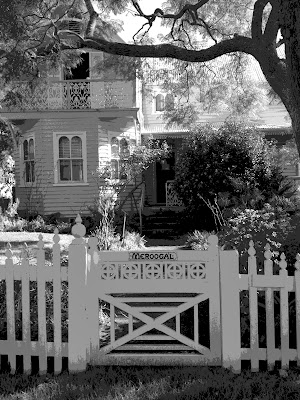 Meroogal was first occupied in 1886, and stayed in the same family until it was bought by the Historic Houses Trust in August, 1985. At the time it was thought to be the most intact nineteenth-century house in NSW, and has been preserved as such ever since. It is only open to the public on occasion. When we were shown round, we had to wear cotton bootees over our shoes to preserve threadbare carpets; and we were the only members of the public there, which improved the experience no end. It was like entering a time capsule, making it possible to explore aspects of life in a country town through the ages. The way in which the family used the house, and how it changed over the years, is laid bare. Minor changes have been made, rooms added or partitioned, furniture moved around, but very little since the 1950s at the latest.

It's also interesting that the family comprised mainly of women. Meroogal was built for Jesse Catherine Thorburn and her unmarried children. It was left to her unmarried daughters; then subsequently to their MacGregor nieces (daughters of their married sister), then finally to the MacGregor's niece, June Wallace, who sold it to the Trust in 1985. Over the years, the women maintained the house virtually without help, and many of their innovative repairs and attempts at decoration are still clearly visible. At one stage they took in lodgers, and as a result one room upstairs is still set up with a tiny kitchenette, complete with rudimentary sink, stove and larder, dating from the 1930s or '40s.

There is such a positive feel about the house, and its history is generally a happy one. The women who lived here over so many years were strong-willed, self-sufficient and resourceful. Various rooms of the house have been used for their various artistic endeavours, and by all accounts they entertained regularly and were popular members of the local society. However, the sense of the past is so strong that I couldn't help but think of all the ghosts which such a place might contain. In much of the house, it's as if the occupants have stepped from the room for a brief moment; playing cards are strewn, books lie open. Inexpertly applied wallpaper has never been rectified. It did make me wonder how much of their strong personalities might still remain. 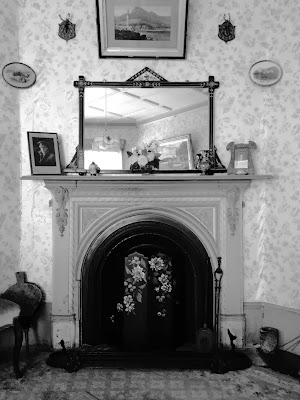 We left Maroogal feeling like we had traveled back in time. Across the road, looking for a spot to eat our picnic, we found a wooded area out on the headland complete with spectacular views across the Shoalhaven River. We decided on an area adjacent to a cliff which plunged down to the huge expanse of water; it has apparently been the scene of several suicides. Which, I suspect, may be a completely different story...