About a year ago, I started to write my memoirs ... well, more of a collection of anecdotes, really. It occurred to me that a lot of interesting aspects of my life may never be known to my kids if I did not write them down. Having relocated to Australia, and of course with many older relations dying off, there could be a big gap in their knowledge of their own backgrounds.
Of course it may be a long time until my children are at all interested in any of this. But, as my father died when I was quite young, I know almost nothing about his life; and, in recent years, this has seemed increasingly important to me. I would give anything even to have an example of his handwriting.
Anyway, I now have many A6 Moleskine notebooks full of these memories and anecdotes, and as I wrote all this stuff down, I realised I was enjoying the process. I have written a little in the past; when I was young I attempted some really bad stories, as most people do, and then more recently working as the creative director of a magazine company, I would occasionally write a feature for one of my titles. I have always looked upon myself as someone who had something to say, but would never have the confidence to say it.
Within my memoirs, however, I began to feel there were some tales to be told which could be of interest to a general reader, not just a family member. (Admittedly, not many general readers; I don't expect any best sellers!) So, I began some short stories, six months ago. It has been a fascinating journey, and when I became aware of the possibilities of publishing electronically, I thought, why not experiment? I don't suppose Robert Aickman would have approved of electronic reading devices, but never mind about that!
Posted by MRCosby at 16:39 No comments:

Why make it up?

When I was a youngster, my father would be up for work at around 5-30 am, which seemed impossibly early to me at the time. He would inevitably disturb me, clattering around in the kitchen below, and I would emerge from my bed and creep downstairs, looking forward to a morning chat with him. The house was usually still dark, and I wouldn't switch the lights on for fear of waking my mother. So, in the gloom, I would cross the landing quietly, and float down the stairs. It was the strangest thing; for years I was completely convinced that I didn't touch the stairs at all. I can still feel the sensation of floating right now. It took me a long time to realise that I was probably just half-asleep, and my mind was playing tricks with me ... but were those tricks any less "real" than mundane, everyday things?
I had a Saturday job when I was at college, and one of the managers in the warehouse I worked in seemed to exist in a parallel universe. He would flit about the place, darting in short, straight lines quite disconcertingly. Scratching his head, always baffled.
I had a recurring dream as I grew up, of a bleak landscape seemingly made of Toblerone-shaped triangular blocks. There was some kind of shop, also made of these things, and I would enter ... then wake up. I can still feel the exquisite texture of this strange world, and when I do, the hairs stand up on the back of my neck.
I suppose my feeling is that one need never "make something up" in strange fiction. Perhaps it may be necessary to do so more in realistic writing?
Posted by MRCosby at 20:42 No comments:

Yes, we all know what they stand for; reading, writing and running. What else is there to do? Well, maybe pick up the kids from school ...
I am preparing a short story for (self) publication, maybe through Smashwords. It is called The Next Terrace, and here is a possible cover image for it: 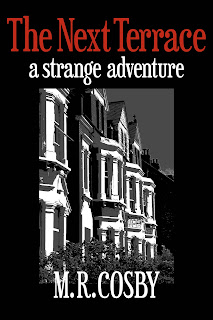 It's part of a collection I am putting together which may be called Dying Embers. I am looking at lots of options for this publishing lark; it's all a bit new to me.
Right now though, I'm off for a run.