This book, written by Gareth E. Rees and illustrated by Ada Jusic, surprised me greatly. I was initially interested in it because, on the surface, it tells stories of and about the area around the Lea basin; and I grew up a short walk from the River Lea. I was therefore looking to reminisce, perhaps to learn a little more of the area's history.

However, Marshland, Dreams and Nightmares on the Edge of London is so much more than that. 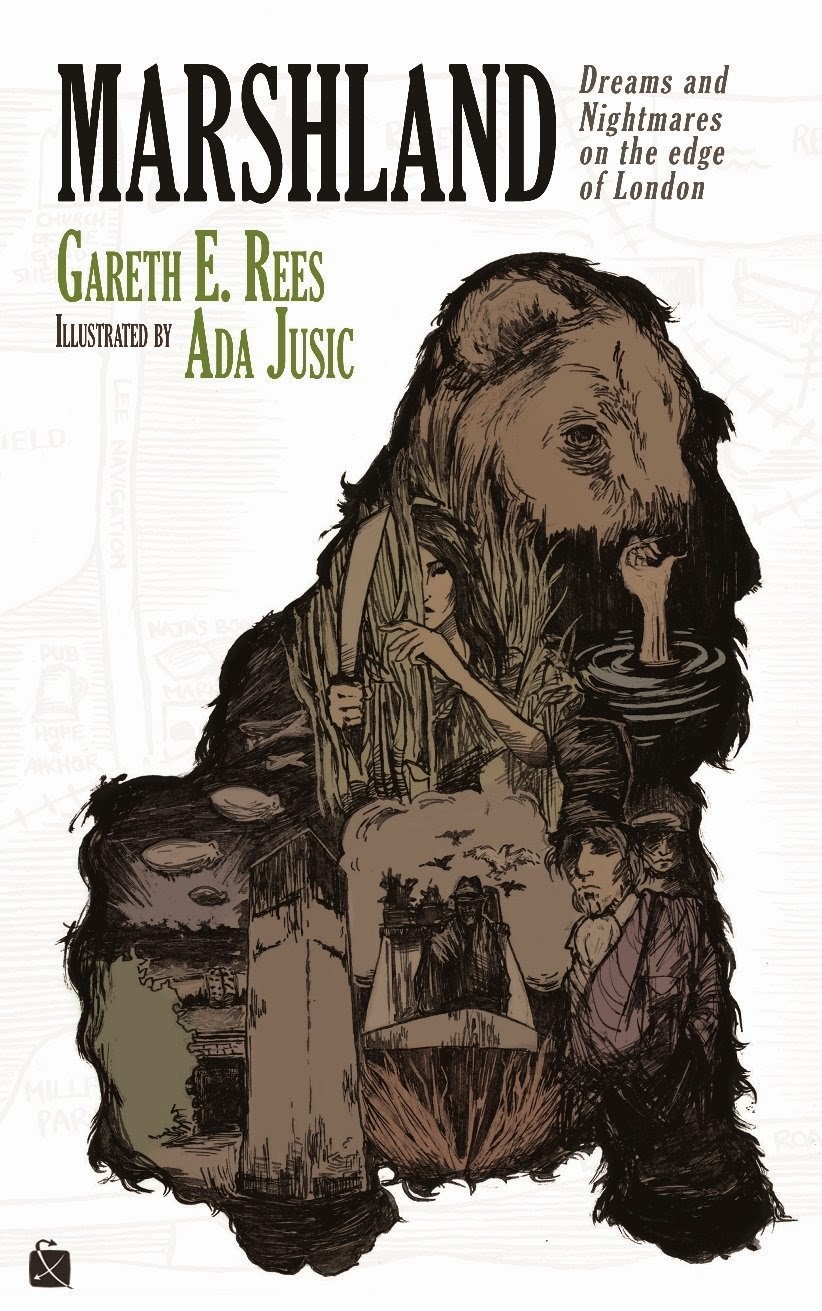 I was not prepared for its broad scope. Part memoir, part historical document, part political commentary, part strange story collection... it works on so many levels. It even has a humorous aspect, with a very funny sequence involving social media, which made me laugh out loud. Although it's all of these things and more, Rees has pulled it all together remarkably well, and it is a thoroughly satisfying read.

Our protagonist wanders the Hackney marshes and the banks of the River Lea with his dog Hendrix. He reflects upon his life, the geography of the area, its history, and his own imagination. In this unique landscape he muses over the legacy of the London Olympics, the inland waterways, the disused filter beds, the fascinating story of Whipple and Hazlehurst, and much more. The reader is taken on a number of journeys where the past meets the present; and where they collide, ghosts are encountered and strangeness abounds.

These ghosts initially take the form of engineers from the Victorian era, haplessly time-travelling and way out of their depth, in The Most Peculiar Vanishing of Messrs Whipple & Hazlehurst. Rees expertly uses these characters from history to highlight the changes in the area both physically and socially. In The Ghost Factory, occupants of a trendy development built on the marshes find themselves transforming into the workers from a demolished factory. Marsh Meat sees Albie meeting a bear... but does the bear meet Albie? Of particular interest to me are the ongoing sightings of creatures in and on the banks of the Lea, as these reports formed part of my own childhood. We even visit the area as post-apocalyptic landscape in Naja's Ark, a fascinating prediction of the near-future; and in Endgames, the switch to the Gregorian calendar is pondered: 'The day Parliament stole time, things began to go wrong on the marshes.'

The illustrations work very well, even in the Kindle version which I purchased, adding another dimension to the book. Indeed, included is The Raving Dead, a stand-alone graphic tale involving zombies rising up from the Lea and haunting the marshes. What more could you want?

Marshland will make you look at your own environment in a different light. It combines fact with fiction, history with horror, temples with time travel. Rich pickings! I enjoyed the ride and I can't wait to read more from Gareth E. Rees.
Posted by MRCosby at 17:00