Ill At Ease 2 is, logically, the follow-up to Ill At Ease, a wonderful yet far-too-brief collection of three tales of urban unease. The original authors Mark West, Stephen Bacon and Neil Williams are joined this time by Shaun Hamilton, Robert Mammone, Val Walmsley and Sheri White for more of the same creeping horror. 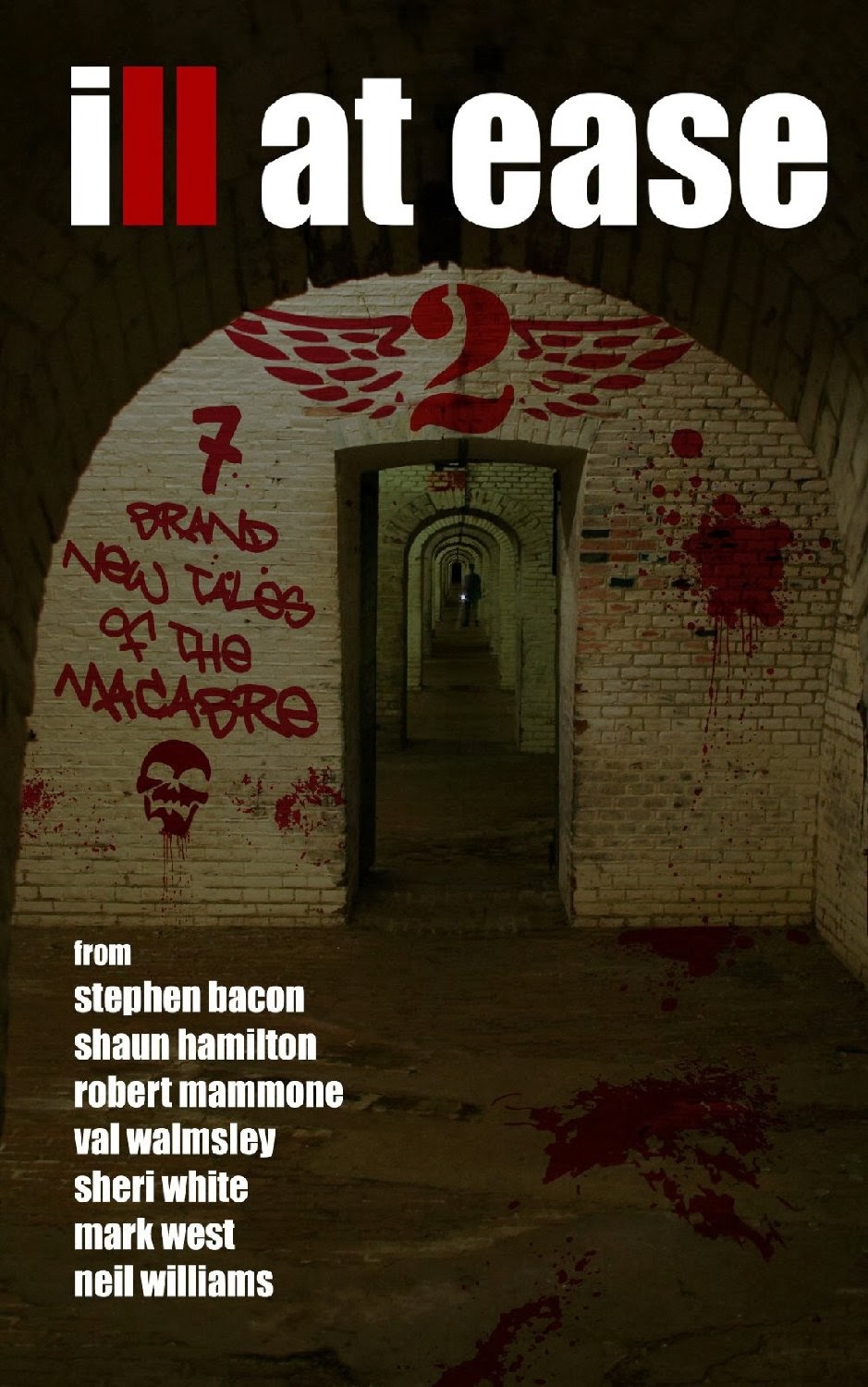 Claire's awkward trip north in Pete's 'battered Ford Focus' turns into something more significant than could be expected in the cleverly-titled opening tale, Double Helix, by Stephen Bacon. The backgrounds of the protagonists are explored deftly, and a keen sense of anticipation is held right until the remarkably positive and thoughtful ending. This is a multi-layered, engaging story which sets the tone perfectly for the rest of the collection. Shaun Hamilton's The Shuttle follows up strongly, a powerful tale of relocation, and the dream of a new start in life. Paul and Sally are striving to become parents, and have exchanged their city pad for a family house in North Wales; but have yet to find out about the strange hold the quarry has over the local area. Suffice to say that, as a parent, Hamilton made it difficult for me to read some of this, but that's often the sign of a great horror story!

Masks, by Robert Mammone, deals with the aftermath of a disappearance. Harry is be the prime suspect after Emma, his partner, goes missing, and Detective Standish is determined to get his man. However, a blurred CCTV image of Emma leads to an obsessive search, and the tension is built up to a crescendo in the tunnels of Melbourne's underground train network. Edge-of-the-seat stuff, aided by a grittily authentic location. Next up, Val Walmsley subjects the reader to a severe case of schoolyard bullying in One Bad Turn; involving a haunted yew tree, and an unwittingly effective revenge. Be careful what you wish for, indeed!

Mark West's contribution, The Bureau of Lost Children, must echo every parent's worst nightmare. Scott is left in charge of his young son Josh, temporarily abandoned by partner Jess in the Weston Centre, 'a new development dedicated to the worship of materialism on the outskirts of Chaton'. I recognise the sudden, empty realisation which strikes when a child goes missing, even for a moment; what West does is to follow this up with the awful details of what may happen next. The resulting nightmarish situation is enough to chill the blood, and the ending is like a blow. The Bureau of Lost Children is one of the highlights of this collection.

Speaking of nightmarish situations, Sheri White creates just that in Paradise Lost, a remarkably bleak, apocalyptic tale. Short and sharp, with a terrifying climax, it is sure to convince the reader to never again skimp on the holiday sunscreen! Finally, There Shall We Ever Be, by Neil Williams, finishes the proceedings strongly. Mark is returning home to Warrington to attend a funeral, and he chances upon an elderly companion, who alerts him to changes in the town and of how its past is being neglected. Surely all the ghosts and stories of years gone by have to end up somewhere? Mark discovers a nether world which mingles painfully with his own past, challenging him in ways he could never have guessed at. This is a gripping, tightly written tale with a great sense of location.

I thoroughly enjoyed Ill At Ease 2, and it turned out to be one of my reads of the year. The format works very well, the stories complement each other perfectly, and I very much look forward to Ill At Ease 3. My only humble suggestion would be to increase the number of tales once more!