Review: Ghosts and Other Supernatural Guests by PJ Hodge 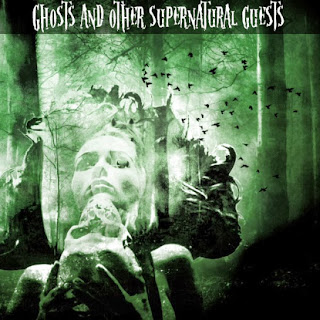 I've long been a keen follower of the Freaky Folk Tales blog by PJ Hodge, so I was very excited when I heard that these fascinating tales would be published in book form. The first volume has duly arrived, just in time for Hallowe'en (and, perhaps even better, well in time for Christmas).
The great news is, these stories work really well in a book format; Hodge writes in the style of MR James, or, more recently, David G. Rowlands, perfect to enjoy while relaxing in front of a roaring fire as darkness falls outside.

There are twelve tales here, and all are imbued with a unique authenticity which lifts them above the usual; Hodge has done the hard yards of research, and it shows. The reader is treated to a supernatural tour of traditional England, in which local myth and legend is intertwined with well-crafted drama, creating the kind of book it's difficult not to read in one sitting.

The scene is set by The Ghost Bureau, welcoming us into the world of Victorian drawing rooms, spiritualism and seances. The sceptical protagonist accepts a position with the eponymous organisation, and is forced to reconsider her own lack of belief in the spiritual world when she sees her own murderer – or does she? A gripping start, followed by A Tip of the Hat, which is something of a comic interlude, and deftly done.

In The Viaduct, an evocative tale of childhood misadventure and is recounted. During their summer holidays, Peter, Tom and James have explored further from home than ever before, encountering the viaduct that they had previously only seen from afar. There they hear an inexplicable dialogue, and become fascinated by the place, returning a few days later to find out more. Unfortunately, warnings are not heeded, and it all ends in tragedy. The wistful companionship of youth in a long-lost English landscape is picture perfect, and the reader is led by the hand into Return to Tyneham. To me this was one of the most powerful tales here, tackling the thorny issue of evacuation during the war. A whole village is relocated, but one family reject the new accommodation and choose to be "taken in" by their aunt Alice, who lives nearby on a farm. Heartbroken, they arrive, expecting to be welcomed but finding a deserted shell of a house. Alice's ghostly presence is felt, as is the rearrangement of space and time; revealing the need in everyone to have somewhere to call home.

The Flames of Stalbridge Manor introduces us to a terrifying phantom. Staying at an unfamiliar country manor, a family is subjected to horrific visions of a figure engulfed in flames. Distressed, they leave, only to find out rather more than they are comfortable with; someone was burnt to death there long ago, and ever since, the house has been boarded up. This leads to a deliciously ambiguous ending, which leaves the reader thinking. By contrast, A Tale of Chirbury is a more ancient tale of superstition and suspicion. A village is told by a witch not to enter the grounds of St Michael's church on All Hallow's Eve, but certain of the congregation choose to ignore this warning; and they hear the names of those who will be shortly buried therein. This roll-call of terror comes to haunt the whole village and affect later generations. Is it possible to step out of the shadow?

The collection is concluded by Alice's Ghost, the touching tale of a nobleman's love for Lucinda, the young daughter of his housekeeper. His proposal of marriage to her is accepted; however, the ghost of his dead wife Alice returns to warn him against re-marrying, and eventually he wilts under her intense supernatural pressure. In despair, he throws himself from a cliff; but is it the end, or merely the beginning? And is he in fact rescued, and if so, by whom?

I can see this book being the first in a long and successful series, and PJ Hodge becoming even more of an authority in local myths and legends. I'm eagerly anticipating the next installment already!
Posted by MRCosby at 20:27