I have now completed seven short stories for my inaugural collection, tentatively titled Dying Embers. I realise I haven't mentioned this lately, as progress has been painfully slow. Even the stories which have been published previously have been revamped. In fact every time I re-read them I change something! Does anyone else have this problem? Anyway, my feeling is I need around 10 in total, which is OK as I have five more in progress; but at this rate it will be another few months before I can even think about finalising things. Part of the trouble is that I have not been writing for long (not fiction at least) so I don't have any kind of 'treasure chest' of previously written stuff. Also, the layout and general look of the book is concerning me. As a graphic designer, I'm used to having complete control over these things, and with e-books these aspects are amorphous to say the least. The cover is fine, but I want the typography within to work well too. I have experimented with PressBooks, and that seems to work very well. I have entered my text into separate "chapters" which affords good flexibility. It's free, simple to use, and I would recommend it to anyone putting a book together. 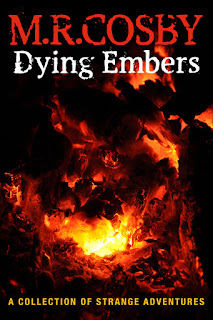 Here are the stories I have completed so far:

The Next Terrace
The past collides with the present; childhood bonds are first stretched to the limit then broken in this tale influenced by Dante's Inferno.

Playing Tag
An historic building holds the key to a terrible secret from Letherby's youth. Why is he drawn so powerfully to its mysterious Pavilion?

The Source of the Lea
Pocock witnesses something on the river bank which changes the course of his life. Did it really lead to him discovering the true source of the Lea?

In Transit
A passenger on an international flight finds he is most certainly not master of his own destiny. Finding out who is, though, is quite another matter!

Necessary Procedure
An ill-fated property search leads firstly to admission, then a strange form of retribution; and, ultimately, reunion.

Unit 6
The alien landscape of a network of warehouses provides the background to a remarkable transformation. Or does it?

Abraham's Bosom
A remote coastal walk still echoes with a tragic event from long ago, charting an individual's gradual descent into some kind of madness.


Here are the stories I'm still working on:

Turning the Cup
The traditional art of tasseography combines with local folklore to resurrect an unwelcome visitor.

Building Bridges
You always wanted a left-field story about dinosaurs! Well, I hope you did anyway.

Fingerprinting
Rural Australia proves to be less welcoming than Preston had hoped ...

The Key
An impulse purchase on eBay has an uncanny effect, and proves more trouble than it's worth.

Burnt Close
The exploration of a newly-built housing estate changes the course of some young lives.


Hopefully it won't be too many months until it's all done and dusted. I'll keep you informed!