As I've probably mentioned before, I tend to do most of my writing while watching the world go by in a fairly busy cafe. I think there are a few reasons for this. First, I am what is usually referred to as a 'house husband'. So therefore, when I'm at home, there are myriad distractions such as washing up, making beds, making dinner for children, and so on. Second, I'm a fairly sociable person; and writing while looking after offspring can lead to a lack of human interaction (at least, humans older than eight or so). Third, I love to be outside, so I enjoy the walk up the hill from Coogee to Randwick. Luckily, I live near many great cafes, my favourite of which is Cafeonesixnine, pictured below. I usually sit at one of those round tables on the left. Those windows open right up to take advantage of the Sydney weather (by the way, mine's a large soy flat white if you're offering...)

Running is very important to me. I have recently read a couple of blog posts about writers who are also runners, so it seems I'm not the only one. (The excellent Chris Hill posted one here). I find that I can often think clearly while on a run, and a difficult aspect of plot can be resolved with ease. There are different kinds of running though; a steady jog, for an hour or so, is great for the creative juices, but I also do some tough sessions with a group of other runners. Then it's just survival. Nothing else is in your mind apart from finishing the required number of repeats, or keeping the correct pace. Then, I feel it is like a re-set switch for the brain; and, after I've recovered, problems can be faced with renewed focus! Unless, of course, the session went badly, in which case I'm just depressed, but that's another story ...
I've just ordered a copy of Night Voices by Robert Aickman, one of the Tartarus Press re-prints. I bought Aickman's Collected Stories from Tartarus back in 2001, and read them cover to cover. In subsequent years, I have re-read most of the stories within many times. Then, I tracked down most of his first edition hardbacks from the '60s and '70s, which I treasure. Some of them are signed too. There are some pics here, and here if you're interested. Despite this, I still have to get all the new Tartarus editions as well ... just because they are so beautiful. Plus, it's a good excuse to read those timeless tales once more! Here is a shot of my favourite bookshelf: 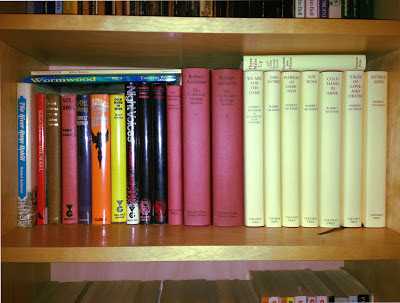 Here's my second favourite bookshelf, my existential section (is it really there? I guess, in a sense ...): 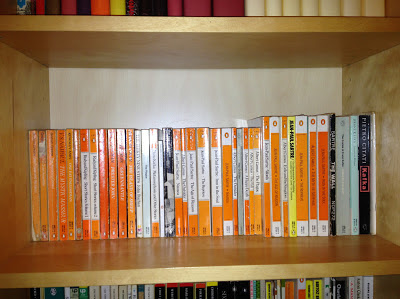 There are thousands of books in our house; however, I must say I am addicted to electronic books. I love the immediacy of downloading what I want to read straight away, and it's safe to say I have read many more books because of that convenience than I would have otherwise. It has opened a whole new world for me. I've never had a problem with poorly-written e-books, purely because I am a fussy reader. I would not read anything I felt was not worthwhile either on a kindle or as a physical book. I am more likely to take a risk on an electronic book, admittedly, but being able to read the first few pages on Amazon is invaluable. Also, I don't think I have bought fewer physical books, because if I enjoy an e-book enough, I will definitely purchase the 'real thing', which I may not have risked if I hadn't read the e-version. I do regret the decline of bookshops, though, and I can't convince myself I'm not complicit in this. I still love browsing and buying a book, and I make sure I do so often. I'm in two minds about Amazon. I know the situation is essentially unhealthy, but all I can do is this; when there is an option, I go elsewhere. For example, I go to Ash-Tree press to get their e-books, and also to Tartarus to get theirs, rather than to Amazon. I don't suppose that means much, but there you are.

I would be most interested to hear your views on the e-book debate, and also on the perceived quality or otherwise of self-published books.