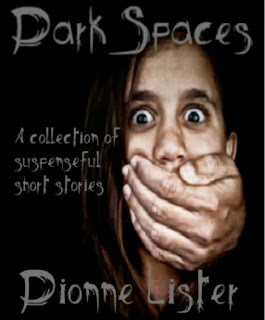 Dark Spaces by Dionne Lister is a collection of short stories and flash fiction. In the author's own words, they are 'stories of survival, fear, suspicion and emotion'. I am a particular fan of short stories of the darker kind, so I was looking forward to trying these out.

Breathe in Autumn is a strong start to proceedings, the clever title only becoming apparent in retrospect. Autumn is out for a run, and is concerned at recent reports of a stalker. When her fears become reality, the perspective changes and we see events unfold from the eyes of her attacker; but is there more to the situation than it would appear? Edge of the seat stuff, and the last line is great too.

Next up is An Awakening, an intriguing tale of love and forgiveness. Marian has a choice to make, and she is forced to come to terms with a relationship which has been at times difficult. A very human story, Dionne has the ability to encapsulate feelings and emotions, engaging the reader completely. An Outback Lament follows, a powerful piece of flash fiction worthy of any collection of Australiana. Capturing the harsh and unrelenting beauty of the country, I could almost hear the cicadas singing.

There's a different kind of beauty in Sarah's Story, that of survival and desperation. Sarah is struggling with a failed relationship and needy infant. However, the reader's sympathies change as the story unfolds, and we learn who the real victim is. By contrast, in The Presentation there is no doubt about the villain of the piece, and there is a real sense of satisfaction at the conclusion. Revenge is a dish best served cold!

Timmy's Escape is a modern-day fairy tale about failed relationships, and is all the more powerful for being brief. The sense of sorrow and regret is tangible, and leads the reader into the next tale Amy, which is perhaps the meatiest story here. Amy would seem to be the victim of abuse, and the product of a broken home; but who is responsible? Another edge of the seat story with a twisty ending.

Helen enjoys 'watching other people suffer', so as a nurse it might be said she is ideally placed. In Heart of an Angel we see what happens when the vulnerable Elizabeth arrives, and she is tempted to go too far; then is confronted with her own worst fears. The hunter becomes the hunted, and we are left to wonder how – or if – she will cope. The final story here is Climbing Everest, which tells Evelyn's story of estrangement, addiction and eventual reconciliation. The power of human relationships conquers all, despite everything.

These tales are insightful snapshots into human nature, taking a hard look at the decisions which have to be made, and their consequences. We see deeply into the minds of the characters, and as a result we care about their actions. I thoroughly enjoyed this collection, and it left me wanting more; I look forward to Dionne's next collection of short stories.