Hitcher and Those bastards in their mansions

I have posted a couple of very well known Simon Armitage poems today; Hitcher and Those bastards in their mansions (both from Book of Matches). Not ghostly, but certainly horrific in a mundane, matter-of-fact way; which is something I strive to achieve in my writing. 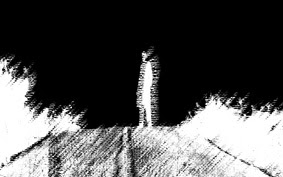 Hitcher must be Armitage's most famous poem. It is simple yet ambiguous; is it a straightforward monologue, or is the speaker remembering himself as he was before being enslaved into working life? The casual violence of it is shockingly effective.

I'd been tired, under
the weather, but the ansaphone kept screaming.
One more sick-note, mister, and you're finished. Fired.
I thumbed a lift to where the car was parked.
A Vauxhall Astra. It was hired.

I picked him up in Leeds.
He was following the sun to west from east
with just a toothbrush and the good earth for a bed. The truth,
he said, was blowin' in the wind,
or round the next bend.

I let him have it
on the top road out of Harrogate – once
with the head, then six times with the krooklok
in the face – and didn't even swerve.

I dropped it into third
and leant across
to let him out, and saw him in the mirror
bouncing off the kerb, then disappearing down the verge.
We were the same age, give or take a week.
He'd said he liked the breeze

to run its fingers
through his hair. It was twelve noon.
The outlook for the day was moderate to fair.
Stitch that, I remember thinking,
you can walk from there.

Those bastards in their mansions could be seen as a powerful call to arms for the populace. It would seem that the privileged should not persist with complacency; instead they should look out for one who sticks to shadows and carries a gun!

Those bastards in their mansions
by Simon Armitage

Those bastards in their mansions:
to hear them shriek, you'd think
I'd poisoned the dogs and vaulted the ditches,
crossed the lawns in stocking feet and threadbare britches,
forced the door of one of the porches, and lifted
the gift of fire from the burning torches,

then given heat and light to streets and houses,
told the people how to ditch their cuffs and shackles,
armed them with the iron from their wrists and ankles.

Those lords and ladies in their palaces and castles,
they'd have me sniffed out by their beagles,
picked at by their eagles, pinned down, grilled
beneath the sun,

Me, I stick to the shadows, carry a gun