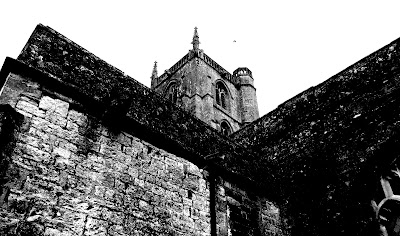 I know this is what the world has been waiting for ... so, as threatened, here is my pick of the short stories new to me during 2012. There were so many great examples from so many great writers, and really I am spoilt for choice. However when I cast my mind back, these ones stand out, for various reasons.

The Man in the Grey Bedroom by Reggie Oliver
This was my first taste of this author's work, being as it is the opener in his collection The Masques of Satan. I was immediately taken by his writing style, feeling at home with his distinctively dry, rather aloof delivery. It is a very atmospheric tale, and despite poor Jack Protheroe's demise never being in doubt, his journey still fascinates. This is a rounded, satisfying read in the traditional sense, reminding me somewhat of The Fully Conducted Tour by Robert Aickman. I have since read everything I can from Reggie Oliver, and I have enjoyed all his output. He is a very consistent writer, with very few wrong notes (in The Masques of Satan I can only think of The End of History as being less than successful). If I have a criticism of his work – more of an observation really – it would be that his stories are all a bit 'samey'. With some collections, I can happily read them right through in one go, but I have to dip into his on and off; perhaps in this case due to the recurring theme of the stage and acting in so many of his tales, something with which I do not have an affinity.

The Shouting by L.T.C. Rolt
I had always wanted to read Sleep No More and finally managed to do so. Anticipating something special, I wasn't disappointed. Of course I understand all about his relationship with Aickman and Elizabeth Jane Howard, and the rumour that Aickman started to write his stories in competition with Rolt. Reggie Oliver put it succinctly in his introduction to the new Tartarus edition of Intrusions:
In 1948, under the auspices of the Richard Marsh Agency, Rolt published a volume of ghost stories called Sleep No More. It is likely that Aickman began to write his 'strange stories' partly to compete with Rolt.
It is generally considered that Rolt's collection is a fine one, but that it consisted of conventional ghost stories which broke no new ground. After reading this enthralling volume for the first time, and knowing Aickman's output so well, I might beg to differ. I can see some aspects of these tales which must surely have been quite influential. Certainly they are more evolutionary than revolutionary, but there is a lot of weirdness going on, and some fascinatingly unresolved endings. I just loved all these stories, but the one that stays in my mind the most is The Shouting, mainly because it is so unconventional. Edward's phobia of woods is creepy, and the juxtaposition of the innocent children and the strange 'shouting' could perhaps have come from Aickman's mind. Oh and the concluding sentence is great too.

Off the Tracks by Steve Duffy
Night Comes On is a great collection. Every story is compelling. But I had not quite finished it early last year, and just before Christmas I realised I hadn't yet read Off the Tracks, the last one. This was one of those stories that manages to hit a nerve. Duffy's evocation of the railway brought back memories of mine from when I would travel into London St Pancras most weekends with my father, back in the black-and -white early 1970s. We would indeed stop alongside damp, bleak, blackened cuttings on the outskirts of the city for no apparent reason:
A grim, solitary world, too, it is, where no one ever goes, bar the odd gang of navvies laying tracks or fixing signals.
I found myself transported back to those days, sitting in the old sealed-off compartment trains with velour seats, and those stiff slide-down windows with the warnings next to the emergency cords. I also remember seeing grim-looking doors set into those cuttings we would stop beside, and wondering what they were there for, never seeing anyone enter or leave. Once you have read Duffy's thoughts on what happens behind such doors, you might want to catch the bus next time.

When the Walls Bend by James Everington
I really enjoy strange stories with a mundane setting, and this is a great example, from the excellent collection The Other Room. Everington is adept at creating tense atmospherics in ordinary situations, particularly in The Shelter and First Time Buyers, and this tale is just as good. I connected immediately with the hapless protagonist; and the 'landlord' Dom made my skin crawl, recalling perfectly Chris Ryan's character Mike in The Young Ones. Or is it just my age? Anyway, the combination of the ordinary and the supernatural meld perfectly, and the story whisks you along ... to the perfect conclusion. This is a story I feel I should have written. But would it have been as good? No way!

The Knock at the Cellar Door by Paul Finch
This is a compelling, powerful story, the ideal opener for a collection. Though thoroughly conventional, it is very well written, and the kind of tale which could easily be made into a screenplay for TV (or a radio play). It has a very strong opening sequence, and the tension is wound up and sustained expertly, with village inhabitants being not what they seem, and a growing sense of impending doom. Love it!  The idea of the door opening into the mountainside (I won't say more) is satisfyingly creepy. Yes, the story is one long cliche, but it is one that has been proven to work well; and it sent a delicious shiver down my spine nonetheless.

Mannequins in Aspects of Terror by Mark Samuels
Speaking of shivers down my spine, I must admit that this story succeeded there too. This is a delightfully quirky tale, set in a modern city landscape where terrible things exist alongside workers going about their everyday business. A junior architect develops an obsession with an apparently  deserted office block visible from his office window. When an 'art installation' is opened in the building, by Eleazor Golmi, an architect he admires, he just has to go and experience it. What he discovers is more than unnerving, and a couple of sequences in this story are genuinely creepy even for the seasoned strange story reader. I have re-read this story a number of times, and I can see myself doing so again. Essential reading.

Mortmain by John Metcalfe
Of course Mortmain is well known as a classic ghost story, but I had not read any of Metcalfe's work until last year (apart from Brenner's Boy, which is great but ubiquitous!) I was fascinated by Nightmare Jack and Other Stories, as I had not realised quite how enigmatic and complex his tales would be. I was taken with their modern feel, and how strange they are, not quite like conventional ghost stories. Mortmain is like a dream, or a nightmare. The recurring appearances of Humphrey Child's boat (no, not the Child from Ridgway's Hawthorn and Child ...), and the various preturnatural moths, create a malevolent atmosphere quite at odds with the peaceful setting of the idyllic Hampshire coast. From the start, it's clear that things will not turn out well. Elizabeth Jane Howard's masterful short story Five Miles Up has a similar feel, and not just due to the subject matter. Metcalfe's colourful life and tragic end only adds to the fascination of his stories. He wrote some interesting novels too, apparently, but I have never seen anything of them.

A Different Morecambe by Simon Kurt Unsworth
'I don't want to go to this Morecambe. I want to go to a different Morecambe.'
This story was the first I had read by this author, and it struck a chord immediately. A a parent I am very used to trips with young children, as is the premise behind this tale. The interaction between Huw and his son Lennie is well observed, creating a realistic feel. The idea of there being an alternative reality, but existing in such a prosaic location as Morecambe, seemingly obvious to the child but a mystery to the parent, is interesting and works well. A growing sense of unease is created both by the excellent prose used to describe the differences between the two Morecambes, and the changes happening to Lennie simultaneously. I won't go into more detail but suffice to say the ending is great and it is written beautifully.

There were many other stories I felt were excellent, and I will summarise them in another post.