The Source of the Lea part two

Surely this is what the world has been waiting for ... Here is the second part of The Source of the Lea. I posted the first part in January here. So now you can find out what happens next! 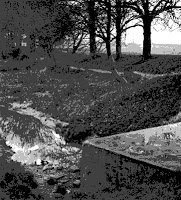 The Source of the Lea part two
My old man never wanted kids, and mum wanted lots of girls. But she only got me.
Don't get me wrong, I was pretty happy. Everyone thought I was shy, and maybe I was. You might remember, Fowler, I was a bit of a loner. Content to amuse myself, I guess – living in my imagination.
Things went bad between my folks, and they went their separate ways. Well, dad was forced on his separate way at least. Mum kept our house. First, he went into one of those mobile home things. He did his best. He was a keen gardener, you know. He cut the grass, planted a flower bed, and even built a shed for his bike and lawnmower.
He didn't need a lawnmower once he'd been moved on by the council, though. You'll know the place he went, one of those tower blocks on the edge of the Moor Farm estate. He moved into the end block, Five Springs. No garden for him to look after there, of course, just a small balcony. I don't think he ever really got over that.
It was only about ten years old back then, but Five Springs was already pretty rough. The foyer was just a concrete shell. Graffiti everywhere. The lifts didn't smell great either, I can tell you. The building was grim, yet it kind of fascinated me.
You're wondering why I'm telling you all this, and I don't blame you. Well, it's all to do with the river, see.
Hey, Fowler, do you remember that primary school trip we did, to discover its source? Us kids, wandering around with notebooks, compasses and packed lunches, searching through the Spinney. Teachers must've been busy that day!

He laughed mirthlessly at that. I thought hard, dredging up long-forgotten impressions. I vaguely recalled the trip, and something about Pocock. It suddenly came back to me. He had wandered off into the trees, and was missing for the whole afternoon. Our outing to discover the source of the Lea had turned into one to find Pocock. Eventually, he had joined us again as if nothing had happened.
Shifting restlessly in his chair, he seemed distracted. I had to urge him to continue.

Well anyway, mum and dad couldn't shout at each other any more, so I was much happier at home. 'Bout then, I started to notice girls for the first time. One girl in particular, anyway.
I don't remember the first time I saw her. She just seemed to be around, friends with a small group of girls I knew by sight. Every morning I'd look out for her from our front window, trying to time it right to bump into her on my way to school. She was in the year below us. S'pose you could say I had a crush on her.
She was like some kind of exotic beauty. Her skin was a rich, deep brown. Her hair was long, shiny and dark. Maybe you remember her? I couldn't take my eyes off her.
I didn't have the first clue about girls, though. Still don't. Couldn't even pluck up the courage to speak to her. But I didn't care. Just to look at her was enough.
Back then, I didn't know that I could ever want anything more.

Pocock paused, closing his eyes. Telling me this was taking a lot out of him. It was getting late, but I had no reason to rush off. Besides, I was at last starting to get warm. With some effort he rose and shuffled to the kitchen, returning with a few cans of beer. He threw one over to me, the shadow of a smile on his lips.

One Sunday afternoon, shortly after he'd moved into Five Springs, I went to see my dad. He handed me a pair of binoculars, still in their box. I could tell they were good ones.
"Wow! Real binoculars. Where did you get them?"
I probably shouldn't have asked. Because of the trouble about how much he could afford to pay mum for my upkeep, he was always worried about showing me stuff he'd bought.
"I was at the market last week, and I picked them up for a song."
Fascinated, I played with them, adjusting the focus. They were pretty heavy. I reckoned they were brand new.
"There must be a great view from the top floor," he said. "Let's go up and see what we can make out."
I looked at him sadly as he shuffled into the filthy lift; a smartly-dressed man with a pencil moustache. He looked out of place, like someone from a previous age.
We went right up to the 14th floor. I'd never been so far from the ground. From one side of the building we could see right over the Spinney, all the way to the playground in the fields near my mum's house. And the river all the way until it disappeared under the railway bridge.
"It's a great view from up here," I said. But at that moment I was distracted. I'd focussed on some figures in the distance, and realised with a sudden shiver that one of them was her. They were wandering towards the swings. She seemed so beautiful and so calm. The other girls were running in all directions.
Dad tapped me on the shoulder.
"What are you gawping at? You'll be spying on your school friends next!" He was only having me on, but I quickly handed the binoculars back, embarrassed. I found myself hoping the girls would visit the playground on other Sunday afternoons, so I'd be able to look at them again from the top floor. I knew I wouldn't be able to help myself.