We Were Strangers, edited by Richard V. Hirst

Two things I love so much – short stories and Joy Division. What could be better?
"We Were Strangers" is a very well presented collection of 10 short stories, all of which are inspired in some way by legendary Mancunian band Joy Division. Each story takes its title from one of their songs, but doesn't necessarily reflect that song in particular. 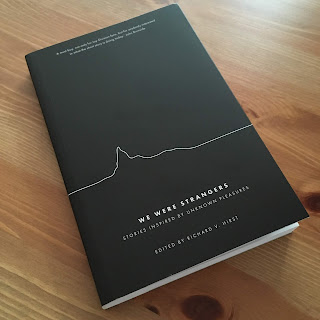 Nicholas Royle, a writer whose short fiction I have loved ever since I read "Archway" in an obscure collection many years back, kicks off proceedings with "Disorder". This is a fascinating opener, in which the only words used by the author are those which appear in the song itself (obviously, in a different order and multiples thereof!). The result is a dreamlike sequence, almost stream of consciousness, but with enough of a narrative to drive the story to a satisfyingly bleak conclusion. Subsequent stories are no less bleak yet powerful. "Day of the Lords" by Jenn Ashworth is a thoughtful tale about a returning serviceman and the family he has lost touch with, due to some kind of undiagnosed PTSD. "It wasn't always like this," Rick said, as if reading his mind. He gestured towards the photographs on the wall, sun-faded now, and still in their brown, gold-embossed cardboard frames from the photographer. "I was different. I was all right. Before I went out there."
Next up, "Candidate" by Jessie Greengrass is about a dystopian near-future in which citizens are used as pawns in a bizarre game: concisely realised and exactly the kind of world which could be created from the lyrics of the title song. "Insight", by David Gaffney, on the other hand, comes from left-field, in which the mysterious John Ireland is collecting garages in Macclesfield. But to what end? Then, in "New Dawn Fades" by Sophie Mackintosh, the downfall of the protagonist is plotted through a rogue computer which seems to be actively reinforcing her bizarre geographical obsessions. 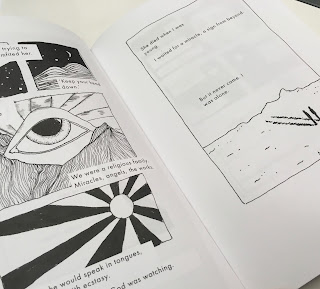 "Transmission" by Zoe McLean is a graphic story (see above). It does well to capture the poetical strangeness of Joy Division lyrics and adds a new dimension to the book – although perhaps the artwork is a little too Radiohead-ish for my liking. The next story, "She's Lost Control", by Zoe Lambert, is perhaps the most predictable in the collection, but it is also one of the best. The young protagonist here suffers from fits and, understandably, she pushes back against her over-protective mother. It is set in the '70s or early-'80s – Dictaphones and Granada Reports –  but the success of the tale lies where hope and compassion are found where they are least expected. "That night, she lies in bed, a chill creeping under the duvet, her nose and fingers cold. She knows how it goes. She starts a job. Has a fit. Loses her job. She had one on her first day at Parker Bradburn's in front of a queue of customers. She was let go – too much of a health and safety danger and it upset the customers."
"Shadowplay", by Toby Litt, is a concise, ice-cold tale of pure science fiction; followed aptly by "Wilderness", by Eley Williams, which concerns an ice-rink re-surfacer. "I re-buff things for a living and gloss things over. I think about the weight of athletes obsessively, the pressure they put on the ice." A chance meeting with a balloon seller at a zoo opens his mind to the possibility of human interaction despite the ice running through his veins. But are his feelings entirely innocent?
In Louise Marr's "Interzone", the protagonist is unexpectedly successful in her quest for employment – straight from a waitressing job, she becomes a Project Manager – yet she feels out of place and unable to "play the game" in an important meeting. Her mind drifts restlessly and the city holds a fascination for her. This is a slight story, but it explores the sense of disjointedness which is reflected in many songs by Joy Division. "I thought about the railway lines outside, ranging and joining behind the station, and the old viaduct with its attenuated curve, the grass ragged and undisturbed now the rails and sleepers were gone. Instead of going back on the train I could stay in the city. I thought of walking beside the river at dusk, when the birds whistle and call over the blue water... so close to the streetlights and the traffic and the windows lit all night."
The final story in this collection is "I Remember Nothing", by Anne Billson. This comes the closest here to being an actual horror story; it is a powerfully gruesome tale of mystery, realisation and, ultimately, gore. No spoilers though!
I must admit that this kind of themed anthology rings alarm bells for me, as I tend to think that the quality of the writing sometimes loses its focus and takes a back seat to the "concept". However, I'm pleased to say that this is, primarily, a collection of fine short stories – most of which would stand up on merit in any collection. Pleasingly, it's not necessary to be a fan of Joy Division in order to enjoy this book.
Posted by MRCosby at 18:29 No comments:

Catching up on books I've read

Recently I've been looking at some of the books I've enjoyed over the past year or so – and in the process, it's made me realise just how many I've read! My project now is to re-visit some of these books in order to review them on here. It's interesting for me to ponder how much I've forgotten during that time: and also to consider how many books I've downloaded which I have not yet read. As ever, I tend to limit myself to short story collections, although there have been a few novels which I have enjoyed too. Below are a few which stand out for various reasons, but there are many more which I will add later. Some proper reviews will follow.

Well it's been a long time since my last blog entry! Things have been so busy over the last 18 months or so, with family upheavals, travel, trying to keep up my running and other non-writing related projects. I just have not had the headspace to write at all. I think, writing wise, I may have let a few people down over this recent period, for which I can only apologise and hope it's understood that it was not intentional.

So, now that things have settled down a bit I can get my mind around putting finger to keyboard again, hence this post. During my hiatus, the publisher of my first collection, DYING EMBERS, has ceased trading and so for a while my book was not available at all. Finally, I have published it myself – with an updated cover – through Stranger Designs, which is a minor project set up with a friend of mine, more of which later. So... it is on Amazon and all similar platforms once more. Also, I have acquired the remaining paperbacks (see below), which are available (via Paypal in fact) on my website if anyone is interested. 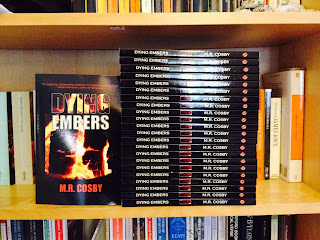 One thing I have managed to do, however, is to read. The truth is that I have probably read even more than ever over the past couple of years. What I want to do now is to make sense of the many short story collections I have enjoyed – some of which have been outstandingly good. I have taken a photograph of some of the excellent books I have read recently and that I will attempt to review; this has made me realise that almost everything I read these days is on the Kindle! 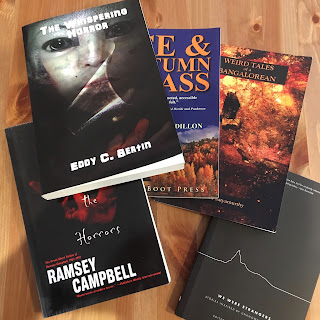 Anyhow, more of that later. I am off to the track for a run, then this evening I will watch a film I have been wanting to see for some time: "It Follows". Sounds like my kind of thing. Who knows, I may even do some film reviews soon. Watch this space!