The Source of the Lea

I've neglected this blogging thing for a couple of weeks. We have been away for a while, the kids are on holiday from school, and ... I've been busy re-writing work I had foolishly thought was finished. The trouble is, every time I read over something I've written, the urge to change something is irresistible. I assume most writers have this tendency. I find it's more acute when I encounter something that influences me in some way by another writer (which is basically all the time); and it makes me want to reflect something differently in my writing.
A couple of books in particular have had that effect on me recently. First, I finished Stories for Nighttime and Some for the Day by Ben Loory. His spare, economic writing style distils meaning, deftly creating atmosphere. It gave me the confidence that I could use fewer words to convey my own message. But also that it helps to put them in the right order!
Second, I read Hawthorn and Child by Keith Ridgway. I have mentioned my doubts about calling this a novel. Really it is a collection of short stories, tenuously linked (nevertheless I like this concept.) In some ways I found it an uncomfortable read. However I could not put the book down, being caught up in the breathless rush of it. It is certainly uncompromising. It follows the method of showing things, not telling them, which is my kind of writing. It fascinated me and made me think: could my stories be a little more confronting? Cue for some more re-writing ...
It must be said that I have not been writing for long. I have yet to truly settle on my own writing style.

Right now I am making adjustments to a short story called The Source of the Lea. I have changed the structure of the tale, adding sequences at the start and the finish. Here is its new beginning. What do you think? 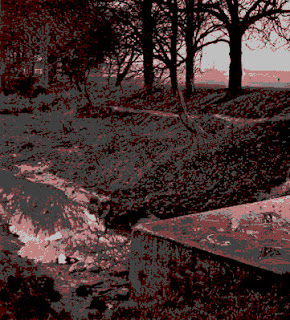 The Source of the Lea part one

"Tell me, Fowler, did you turn out to be the marrying type?"
I recoiled slightly from this blunt inquiry, and his bloodshot gaze. I desperately tried to place him.
"Well yes, as a matter of fact ..."
"Children too?"
"Two, actually: one of each."
He nodded, mopping his shiny brow. His restless gaze flitted about the poorly lit room.

The school reunion had been a disappointment from the start. I was at a loose end, having made the long drive up from the west country earlier in the week. I was staying on the outskirts of the town where I grew up. The very outskirts, in fact, in the very cheapest kind of hotel, on a main road near the motorway. I had my rather lowly standing in the firm to thank for that.
So I found myself looking for things to do, not wanting to spend all my evenings alone in my room. A copy of the local rag had been slipped under my door, and I flicked through it, wondering at how little things had changed in so many years. Near the back was a surprisingly prominent advertisement announcing a reunion for my year at high school.
Normally I would not be interested, but I thought it would at least get me out of my hotel room for a few hours.

He really was rather on edge. It seemed for a while he was quite unaware of my presence, so intent was he on scanning the room; but as I turned, about to make my escape, he placed his hand on my arm and looked me in the eye.
"By the way, old man, when you came in, did you notice a brown-haired girl push past you in the doorway; attractive type?"
I certainly would have noticed an attractive girl, especially in the gloomy scout hall. A makeshift bar had been set up in one corner, and music played from speakers either side of a dusty area cleared for dancing. Nobody danced. The small crowd milled about by the bar. It seemed everyone had kept in touch but me.
I had been surprised not to recognise anyone straight off, and yet to have been recognised several times myself. I even handed out a few business cards, along with empty promises. Perhaps I have not changed much since my younger days.
"No, I'm afraid I can't say I did."
His eyes clouded over and he looked downcast. Staring at his feet.
"Thought so. It's always the same."
I was about to ask what he meant, when I realised who he was. Kevin Pocock bore little resemblance to the boy I remembered from school. We had sat next to each other in English during our final term. He was a gangly, unremarkable boy who seemed academically able but lazy. We got on well enough, but he had not made a lasting impression upon me. Looking at him now, however, I could not help feeling sorry for him. His willowy frame had become stooped, his once thick hair now receding, grey and wiry. His complexion was grey too, apart from his nose, which was red, covered in the tiny broken blood vessels of a heavy drinker. He was dressed in a rather haphazard manner.
And yet, I could still see an odd flash of Pocock as he was. The difference was striking.
Draining his drink, he almost dropped the glass as he placed it on the shelf behind him, alongside several others. He looked to me like he needed a lift home. With nothing better to do, I offered.
"Not yet, Fowler. I might have a few more of these yet." He smiled and winked, but I could tell his heart wasn't in it. I didn't offer to get him another. "Besides, you wouldn't want to hear my story. You're the lucky one, with your wife and children. Go home to them, don't waste your time with the likes of me."
At that moment the music got louder, and the first tentative dancers took to the floor. Conversation became difficult, and we decided to leave. Taking his frail arm, I led him out.
The cold night air made me shiver after the over-heated hall, and Pocock's feet almost slipped out from under him on the icy steps. I steadied him and we stumbled to my car.
"Cheers," he said as I felt for my keys.
He lived in one of the estates that had sprung up around the town, and it wasn't very far, as he had assured me. We approached his house through a confusing maze of back streets, and he directed me to pull up opposite a small car park where the remains of a burnt-out car squatted.
"Tradesman's entry, old boy!" Laughing hoarsely, he struggled with an old wooden gate, damp and slimy. We trudged up his back garden path, and he slid open some glass doors. It occurred to me that they had not been locked.
"Make yourself at home, Fowler." He cleared a space on the sofa, moving piles of newspapers, magazines, and old takeaway containers.
It did not surprise me that the house was both untidy and none too clean. What I wasn't prepared for was the extent of the damp. My nostrils prickled. I could see mould on the walls, which were nearly running with water. The carpets were both threadbare and moist. Clearly the upkeep of the place was too much for him, and glimpses of the kitchen told me things were no better through there.
I could hear him putting the kettle on, fumbling around clumsily like a much older man. Unable to refuse the offer of tea, I shuddered at the grimy mug he proffered, wondering how I could avoid drinking it. He lit the gas fire and collapsed into an old armchair opposite me.
"So, what exactly is this story of yours you said I wouldn't want to hear about?" I said it partly in jest, but his hurt expression told me how serious he was.
"It won't mean much to you, I'm sure." His eyes took on a faraway look in the light from the gas fire, and there was something in his tone which suddenly interested me despite my misgivings.
"You remember, Fowler, all that dodgy business about the river when we were in our last year at school?" He started to cough, and it was some time before he could continue. I did remember it all very well, of course. It was a big story at the time, and part of local folklore. "Well, it's tied up with that, in a way. Although I don't really know if there's anything behind the whole thing at all."
By now I was intrigued, and I encouraged him to start at the beginning.

Do you want to find out what happens next? Watch this space!
Posted by MRCosby at 03:28