Review; Black Horse and Other Strange Stories by Jason A. Wyckoff 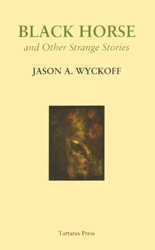 This is Jason A. Wyckoff's very first collection, and was published in 2012 by Tartarus Press. The opening story is The Highwall Horror, which I had read previously on the Tartarus website, and I very much enjoyed. It took me some time to get around to reading the rest of the book; and, I must admit, at the back of my mind, I doubted the other tales would be quite as much to my taste as was the opener. In this assumption I was, happily, mistaken.

It would be unusual to bear witness to a new writer arriving fully-formed (as far as I know, Wyckoff was unpublished prior to this Tartarus Press publication), but I could find very little to fault about this highly polished collection. Perhaps his writing style is a little stiff and wordy, leading to a sense of distance from his characters; but this links well to the traditional 'supernatural' fiction he is clearly influenced by. This formal approach is appropriate and works well, particularly for 'strange' stories, for which disbelief must occasionally be suspended.

The Highwall Horror is a small but perfectly-formed modern-day parable of alienation in the face of a mundane existence. Joe, an architect, moves into a new work space, and soon becomes obsessed by the tiny insects which seem to have invaded his cubicle wall. He glimpses a terrifying alien world, and withdraws, horrified, just as you or I would; there is, quite rightly, no room for heroics in Wyckoff's world view, and I am all the more comfortable with it for that. Just enough is left unsaid for this to be a tale which the reader will reflect upon for a long time.

Panorama confronts the reader with a fantastic artwork which would appear to exist on several different levels, and through which the missing artist may (or may not) be trying to ensnare the unsuspecting viewer. Reminding me a little of Ravissante by Robert Aickman, it is a truly unsettling tale which successfully blurs the line between fantasy and reality, and bears Wyckoff's style very distinctly. Intermediary, by contrast, is a more traditional prospect, involving archaeologists and cursed booty, yet still manages to play with reality and to stymie the reader's expectations. This collection gels immediately and is quickly into its stride; the only stumble arrives in the form of A Civil Complaint, which handles its fantasy rather clumsily.

A mother's flight from an unhappy marriage and her apparently flawed perception of events combine to create The Mauve Blot, an outstanding haunted house story with a psychological slant. Black Horse follows, which I found to be a little unbalanced; effectively building tension and interest, yet having a rather predictable conclusion.

Raising the Serpent takes us to "the back of beyond", on this occasion meaning not the outer edge of the immense West Midlands conurbation, but the grounds of a school somewhere in the depths of eastern Kentucky. Bradley Thurman is a social worker (and a "city boy", perhaps out of his depth), summoned to deal with the aftermath of a cult-style massacre in a church. His relationship with the biblically-named Zedekiah changes swiftly during their interview, and Bradley's fears about the situation escalate and are proved more than justified. The power of the Satanists and exactly what it is they want, and the doubt about Bradley's complicity, combine powerfully on the way to a compellingly ambiguous ending, and one of the best stories in the collection. Next up is The Trucker's Story, which begins like a fairly conventional tale being told over a drink in a truck stop, but develops into something more than that, involving a kind of timeslip situation. It's one of those stories I feel I should be able to grasp, but it remains just out of reach; delightfully unresolved. However, I could not quite fathom A Willow Cat in Meadowlark, in which Samantha Perridot is a teacher who is wrongly told that her mother has died. Despite the obvious mistake, she makes the long drive to view the body, and finds herself looking around the deceased woman's house. She feels the woman's presence there, and sees something inexplicable under the kitchen table in an alcove; is the house haunted? This story was a little too disjointed to work well. I enjoyed the tone and atmosphere, being reminded somewhat of the dislocation of l'Etranger by Camus, but something did not ring true; I was not convinced the protagonist would behave in the way she did.

More conventional, Hair and Nails is as close as this collection comes to a 'normal' horror story, complete with gore, and involving exhumation, re-animation and magick. This dark tale is leavened expertly with humour, and manages a good degree of suspense too. This is followed by Knott's Letter; a missive written to a certain Mr Benner, with the news of his son Kirk's demise in the Adirondack Mountains. Kirk was studying cryptozoology, and searching for the legendary Sasquatch. This letter is written by Tim Knott, a close friend of Kirk's, who accompanied him on their apparently successful search, and who hopes to impress upon Mr Benner the importance of their deceased son's work. To what degree is the letter a product of Tim's imagination? We may never know. Knott's Letter is remarkably taut and well-crafted, and would be a highlight in any collection of supernatural tales.

An Uneven Hand is a brief and effective tale of alienation in the big city. The protagonist feels powerless to intervene when he witnesses a socially dysfunctional family, and somehow finds himself taking up the reins himself – to his horror. Finally, A Matter of Mirrors is the perfect note to end on; the reader is left with good reason to avoid any of those worryingly reflective surfaces ... "Be seeing you", indeed!

Black Horse and Other Strange Stories is one of the most satisfying collections I have read recently, and shows that without doubt Jason A. Wyckoff is a great new talent. His tales both entertain and mystify, while treading strange new ground; I'm sure he will scale even greater heights in the years to come.