The Source of the Lea part three

Here is part three of The Source of the Lea. I posted part two in February here. 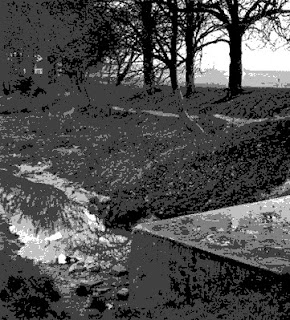 The Source of the Lea part three
One afternoon, she spoke to me for the first time.
I was walking home from school along the edge of the football pitches. I could hear girls laughing and shouting from the main road, on the other side of that big hedge. With a shock I realised they were calling my name. Teasing me. At the end of the hedge, they were all around me, dancing and singing. I didn't know what to do. Suddenly she was standing right next to me, the others running off towards the shops. She didn't look at me, just stared at the ground in front of her feet.
"Hello," was all she said. My heart jumped.
"Hello," I returned uncertainly. "How do you know my name?"
She didn't reply.
"Well then, what's your name?" It was all I could think of to say.
But just then the other girls came running back, and they all skipped away together. I was about to call after her when she paused, half turning.
"You know my name," she said and smiled. Not at me but at one of the smaller girls who was pulling her away. They all laughed as they ran off. I was left standing there, thinking that she'd never even looked at me.
At last we'd spoken, but I still knew almost nothing about her. I'd already tried to find out what her name was from the kids I knew in her year, without any luck. So I reckoned there was nothing for it but to invent my own name for her. I was thinking this over one evening that week, watching TV with mum. Some detective show or other. At the end, the credits were rolling, and there in the list was one I reckoned might suit: Judy Thompson. I tried it out in my mind, and decided right there and then it was perfect. At least until I found out the truth.
The next day after school, I was on an errand down our local shop. She was there, flitting between the aisles, laughing with her friends. I tried to keep an eye on her, and as I got to the till the girls were only separated from me by old Mr Batley. Unfortunately, he wanted to chat, and I ended up helping him home with his shopping too. But not before an image of her was fixed in my mind. She was leaving the shop, and she hadn't even looked in my direction. She wore faded blue jeans with a patch on one of her back pockets. D'you remember the trend back then? Patches with your name on them. Hers said "Judy".

*
He broke off. I wasn't at all sure where this tale was leading, and as far as I could tell he had related nothing much out of the ordinary so far. Always assuming Pocock was remembering straight, of course. I certainly could not bring to mind the girl he was so obsessed about.
He took a filthy handkerchief from his trouser pocket, wiped his eyes, then blew his nose. Finishing off his can of beer noisily, he resumed.

*
I didn't see her again until that Sunday, when I took dad's binoculars up to the roof, this time on my own. It was warm, but cloudy and drizzling. I didn't think the girls would come out in that weather. Scanning the empty playground, I was about to give up when they appeared, wandering slowly towards the swings. Judy carried a large black umbrella. In the dull weather, and through the window spotted with rain and grime, it was hard to see properly.
They were arguing. Circling each other, pushing and shoving, maybe fighting over the umbrella. For a moment I stopped looking, breathing hard on the lenses of the binoculars and rubbing them with the edge of my T-shirt. By the time I'd found them again, they were over by the river bank. Judy was being chased, larking about.
The rain got worse. It looked to me like the umbrella had been left on the edge of the river, by a dark, shadowy area in the reeds and thistles. Judy ran towards it, and as I jerked the binoculars across to see, there was a sudden short, sharp movement. My blood ran cold.
Then I noticed two things. First, one of the smaller girls, still over by the swings, was holding the umbrella. Second, I couldn't see Judy any more.
Had I missed something? The girls were just milling around, chatting. Surely if something bad had happened, they would have done something. Wouldn't they? Feeling faint, my hands shaking, I stashed the binoculars out of sight and made my way down in the lift. Bursting out as the doors parted, bumping into some older kids, I ignored their threats as I ran from the flats. It was pouring, and I was sopping before I got through the Spinney to the park. It felt like such a long way across the football pitches. I got there at last, breathing hard, sweat in my eyes, legs like lead. The girls sat on the swings trying to share the umbrella.
I stood in front of them, feeling foolish. They wouldn't even talk to me. Angry now, I stormed off towards the river. There was a gap in the foliage right on the bank, near where I thought the umbrella had been. It looked like something had crashed through the undergrowth, leaving a trail of destruction. The water beyond flowed strongly. Deep brown and shining.

I had some explaining to do when I got back to my old man's flat, soaked through and miserable. Pretending to be ill, I buzzed off home early. Mum was doing a spring clean, and I happened to glance at a pile of newspapers she was throwing out. On top was the local rag. The headline jumped out at me: "Witnesses fuel 'river croc' tale".
I grabbed it when she wasn't looking, scarpering up to my room. The gist of the article was that ducks and stuff were disappearing mysteriously, and that there might be a crocodile living in the river. Do you remember the big stink at the time, Fowler? I think that article must've been the start of it all, and it only got worse from there.
I didn't get much shuteye that night. Whenever I dropped off, I dreamt of dark, shadowy things lunging at me unexpectedly.
Next day, my head was still spinning. I left for school early, taking the longer way round by the river. I wanted to take a closer look, to convince myself nothing bad had happened. It didn't work out like that.
Crossing the waste ground by the park, I could see things were going on over by the river. The whole area was bordered by red and white tape, and there were panda cars parked on the main road, lights flashing. People stared and pointed.
I must have stood there open-mouthed for ages. I felt sick. Turning in a panic, I raced from the park. Somehow I found my way to school, late for the first time ever. All I could hope for was that I'd see her there, and everything would be back to normal.
No such luck. By the end of the day I was fit to burst. Running all the way home, by the time I unlocked our front door, I couldn't stop myself from crying. Mum hugged me and I calmed down enough to tell her I thought I'd seen something really, really bad, and that the police might want to talk to me. She held me tight until I'd poured out the whole story.
"Oh darling," she said, "they did find the remains of a 14-year-old girl ..." My world fell apart. "But the police are sure the body had been in the river for at least six months."

The climax will be coming soon. Don't miss it!